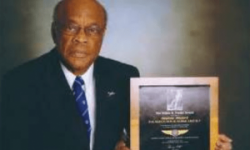 It is with heavy hearts that we acknowledge the passing of Dr. Stephen Blizzard on June 9, 2020.

Stephen Blizzard is recognized as one of the top industry experts in aerospace and aviation medicine in the world. He joined CAMATA in the late 1990’s and was a cheerleader for those involved in the organization. Stephen was president of the organization for a number of years, steering CAMATA and providing stability during the early years of development.

While in Trinidad and Tobago, he continued to pursue his passion for aeromedicine and published the first paper in aviation medicine in the Commonwealth Caribbean titled, “The Aerial Transportation of Patients.”

Dr. Blizzard was awarded numerous awards and accolades over the years for his contributions to the world of aerospace medicine. In 1992, he was made a member of the International Academy of Aviation and Space Medicine. In 2004, he was the recipient of the Dr. Wilbur Franks Award for his significant contributions to the advancement of aerospace medicine and air medical transport by CAMATA. This award is considered to be the highest Canadian accolade in the field of aviation medicine.

Dr. Blizzard was a pioneer in the field of aviation medicine. His contributions live on and inspire new health care practitioners in the study and delivery of aeromedical care.